I saw the little Windows 10 logo show up in my taskbar some few weeks ago, telling me I could reserve a copy of Windows 10 for free. Cool! I did so and waited with excitement for July 29 to come around. It came and went, and my reserved upgrade still wasn’t ready. I saw articles, privacy concerns, Tweets, and a whole subreddit come about, and I felt like the last person who wanted to upgrade but hadn’t yet.

Fortunately, the folks on the windows10 subreddit pointed me at the Windows 10 Media Creation tool which lets you upgrade your PC to Windows 10 immediately. It felt a little weird to short-circuit the reservation process, but everyone else seemed to have good luck with the media tool. The Get Windows 10 app had green check marks for everything about my PC, including how much memory I had, which apps I had installed, and other criteria that would affect my upgrade readiness. I went ahead and took the plunge this morning, upgrading my desktop Windows 7 64-bit Professional machine.

The Media Creation tool downloaded pretty quickly and I chose to upgrade my PC. It went through a few screens of determining readiness, including a long one about “making sure you’re ready to install.” It then showed a summary and asked if I was ready to upgrade. Part of that summary said it was going to keep my files and apps, which sounded right but I had never chosen that option. I clicked for details on that but it just had a couple of options: keep your files and apps, or keep just one or the other. Oh, okay, yeah its default setting was what I wanted. I had to sit through the “making sure you’re ready to install” loading screen again for a few more minutes before I got the chance to start my upgrade.

Once the upgrade started, it appeared to be a full-screen program in Windows 7 like any other installer. It warned me the computer would restart several times. Finally, the upgrade application closed and my computer restarted. When it booted back up, the Windows 10 logo displayed and it went into an upgrade screen. 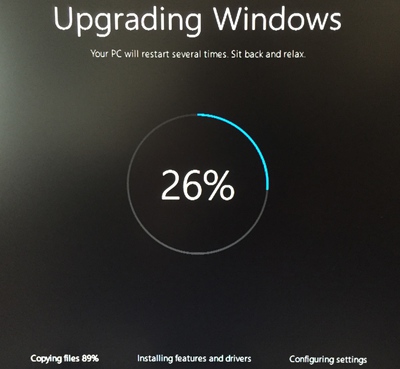 I babysat the upgrade for maybe half an hour this morning before I left for work. When it reached the “Installing features and drivers” portion of the upgrade, a window popped up to let me install some bloatware from Razer because I have a Razer mouse. It was a little unnerving hitting a button labelled “Quit” while in the middle of an operating system upgrade, but I assumed it was just to quit the install for this Razer mouse software that I didn’t want. That dumped me back out to the Windows 10 upgrade screen and things seemed fine. I then left for work, wondering if there’d be any other prompts that would delay the upgrade process until I could get home to handle them.

When I got home, I was greeted with the Windows 10 login screen. Cool, the upgrade finished without any more hand-holding. I logged in with my local user account that I used in Windows 7. I chose to customize my settings rather than use the express settings so that I could turn off a bunch of the reporting and personalization options. Once I got through that, it put me at my desktop. My wallpaper was the same, my desktop was still covered with all my crap from before, but the taskbar was modern looking and black. It looked like the upgrade had succeeded! Then I tried opening some programs.

I tried to open Chrome and 1Password 4 and got an error popup about some ‘Agile’ helper thing that I assume is related to 1Password. Fine, 1Password probably needs a reinstall. I noticed in my taskbar that the Dropbox icon was missing, so I tried to start Dropbox but it wouldn’t start. Okay, reinstall Dropbox too. My first task was to track down how to uninstall an application. I found it under the Start Menu > Settings and was able to sort of uninstall Dropbox. At least, I selected Dropbox and hit the Uninstall button. Nothing more seemed to happen. I didn’t get a confirmation, I didn’t see an uninstaller application launch, the list didn’t refresh after a few minutes to show that Dropbox was no longer there. Whatever, I figured I’d just install Dropbox and let it work itself out.

I opened up the Microsoft store app and saw Dropbox prominently displayed. I clicked the Install button, but it prompted me to log into my Microsoft account in the store. I entered my credentials but got “we encountered an error, please try signing in again later.” Hm, those were the same Microsoft credentials that let met log into my account in the browser, why won’t it work in the store app? Fine, I decided to go directly to dropbox.com. Go there, click the download link… Nothing. Uh what? Go directly to the download link in a new tab, nothing. View in Internet Explorer, click the download link, nothing. Save Target As didn’t even produce a file browser window to let me choose where to save the file. This was seriously weird.

I opened an Explorer window to browse to my Downloads folder in case Chrome and Dropbox had been downloaded silently in the background. When I clicked to open my Downloads folder, though, I got a popup saying I didn’t have permission to access that folder, but I could gain access permanently by hitting Continue. Uh, what? All files and folders in my home directory should be owned by me, and they certainly were before the upgrade. I went ahead and gave myself access but neither application was in Downloads after all.

At this point, I was hoping the kind folks of /r/windows10 could help me out again, so I made another post asking for help. I added a few updates to it as I figured stuff out and got things working.

A couple years ago, I had a problem running The Sims 3 in Windows 7. It seemed my registry keys dealing with The Sims 3 and its expansions were garbled and I couldn’t get the game to run. My solution at that time was to create a new user account called ‘fuckea’ and use it just to install and run The Sims 3 and its expansions. That worked like a charm. While my normal user account couldn’t run The Sims 3, fuckea had no problem. I wondered if the same approach might work here.

I created a new user account on my computer just by telling it the email address of my Microsoft account. I didn’t have to specify a password. I signed out of my local account and saw the new account was listed. When I signed in, I used my Microsoft account password and it logged me in. I saw a clean desktop, the default Windows 10 background, and my taskbar at the bottom of the screen instead of on the left where I normally keep it. I opened the store app and saw that it was already signed in to my Microsoft account–excellent, that was one hurdle down. I opened up the Chrome site in Edge and it downloaded Chrome immediately. I saw a download progress bar instead of just nothing happening when clicking the link. I opened up Explorer and navigated to my Downloads folder, which I was able to access without having to grant myself access first. Things seemed to be set up right on this new user account.

I switched back over to my local user and made my new Microsoft user an administrator, then signed out of the local user. Back on my Microsoft user, I found Dropbox in the store app and downloaded it without trouble. However, the Dropbox app didn’t seem like the Dropbox I was expecting. No Dropbox folder was created, no Dropbox icon appeared in my taskbar to show that my files were syncing. The Dropbox app in the store is apparently some thin client that wasn’t what I wanted, so I uninstalled it. I went to dropbox.com via Chrome this time and downloaded the real Dropbox.

Imagine telling someone less computer literate to install Dropbox on their Windows 10 computer. “Oh, I did.” “No, get the one from dropbox.com, not the one in that prominently displayed store app.” So dumb, why are there two different Dropboxes? I assume the one in the store is the Metro version, and it looks nice, but it really should have a different name. Dropbox Browser or Dropbox Lite or Fake-Ass Dropbox, maybe.

Once I installed the dropbox.com Dropbox, I saw the familiar icon in my taskbar and it was syncing my files. I also ended up with a Dropbox folder in my home folder as expected. Once Dropbox finished syncing, I was able to set up 1Password on my new Microsoft account as well as set up Chrome, run Origin, and install Steam.

Steam was a bit odd because it was definitely installed in Windows 7, but it did not show up at all when I searched in the Start menu for it. Maybe this was because I had Steam installed on my F drive, not the C drive where Windows is installed. When I downloaded the Steam client in my browser (no more of that store crap for me), it let me install it to the same place on my F drive again. It logged me in as soon as I started it, no credentials necessary. I have no idea how it knew who I was and didn’t prompt me for a password; the mysteries of Valve, I suppose.

Both Origin and Steam show my games from before and seem to know which ones are already installed. I tried running Skyrim via the Skyrim Script Extender, which is necessary for some mods, and it sort of worked. Skyrim opened in a tiny window in the top left corner, but sound played and the graphics in that tiny window looked normal.

I tried opening The Sims 4 next, an Origin game, and it worked fine. Granted I ran it from my new Microsoft account on the computer instead of my old local user, so my saves and mods weren’t there; I’ll have to copy those over.

I’ll keep trying other games as I get the desire to play them and find out which ones don’t quite work, like Skyrim. I haven’t had Windows 10 long enough yet to have a good impression of how I’ll like the operating system overall. The upgrade experience was a little bumpy, and it was super annoying not being able to download or install anything until I figured out the workaround of creating a new account. Otherwise, I love that I was able to upgrade my operating system in place and that it was a free upgrade, since OS X has gotten me used to those.