Recently I’ve resumed work on a GTK# project I started three years ago: SnazzyCalculator, hosted on Github. I originally started the project out of curiosity about GTK#, and it’s been fun to develop – I know no one needs another calculator tool. I do intend to develop it into what I’ve been calling a wordulator: type in something like “one plus one equals” and it’ll respond “two”. Feel free to laugh, Jon keeps teasing me about it certainly. :P Anyway, what’s been really fun since I’ve resumed development is getting the parser and equation solver to work. I found this awesome tutorial by Eric White on writing a recursive descent parser in C#, and that gave me the bulk of my parser code. I did discover two bugs in his code that I fixed; I’ll share my fixes with you.

In his Expression.Produce, he has the following:

This caused a ParserException for me because of the checks in the Symbol(params Object[] symbols) constructor. Basically, Enumerable.Repeat returned an Enumerable/&lt;CreateRepeatIterator&gt; instead of either a Symbol or IEnumerable&lt;Symbol&gt; like the Symbol constructor expected, so Symbol wigged out and threw a ParserException. I ended up adding the following to my WhiteSpace class:

Then in Expression.Produce, instead of Eric’s code, I had:

Parsing an expression like (1+2)\*(2+3) resulted in an exception because of the order in which his NospaceExpression.Produce method constructs new NospaceExpression instances. His code was looking for an opening parenthesis and a closing parenthesis first; then, if that didn’t match, checking for an Expression followed by an InfixOperator followed by another Expression. That resulted in it extracting 1+2)\*(2+3, i.e. ditching the first and last parentheses, and trying to treat that as an Expression, which it isn’t. I just moved the following chunk of code down a bit, so it came after return new NospaceExpression(e1, io, e2);:

This results in first trying to find an expression, then some operator that works on two expressions, then a final expression. And since an Expression consists of another NospaceExpression, which can then consist of parentheses surrounding another Expression, you wind up with (1+2) being seen as its own Expression, then \* as an InfixOperator, then finally (2+3) as the last Expression.

After I got the parser working as expected, I had to make it actually do something with its parse – that is, solve the equation. I did that by adding a Solve method to several classes that returned a double representing its value. That was easiest for the DecimalDigit class, since it just returns its own numeric value. I worked up from there, determining what the symbols could be in each class, so I could determine how to take those symbols and produce some double result. A fun part was adding the following method to InfixOperator that returns a function that knows how to solve an equation involving two terms, depending on which operator the InfixOperator contains:

So now my SnazzyCalculator calculates, and it seems to do so correctly, following PEMDAS. It correctly reports “ERROR” when you give it a crap equation like *1.32.34)), or you divide by zero. The next step is to write some tests for it, to ensure I don’t accidentally break the parser or solver while tinkering with other bits. I’ve been fiddling with the GUI, and while it looks all right, I don’t like how I’m styling it. I’m applying the fonts and colors programmatically, instead of in the gui.stetic XML file where all the widgets are laid out. It seems like I ought to be able to describe the appearance of each button in the XML somewhere, but I haven’t found any example showing how. 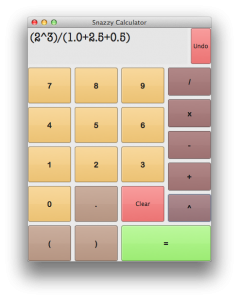