I kept hearing about Stardew Valley on Reddit as well as seeing friends on Steam playing it. It was priced at $15 with an extra $5 to get the soundtrack. I very rarely dislike video game soundtracks so of course I had to get the soundtrack, too. I wasn’t sure how well I’d like the actual game, but /r/girlgamers was talking about it and it sounded cute, with $15 being cheap enough that I was willing to give it a shot, especially to support an indie game. The few screenshots I’d seen put Minecraft in mind because of the item bar across the bottom of the screen, and there was a pickaxe. So whatever, I figured I’d try it. 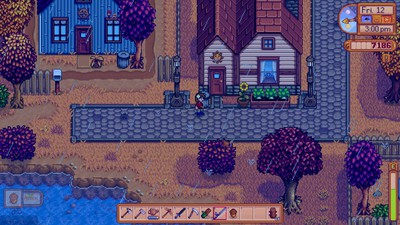 Since then, I’ve put in 74 hours and I love the game. It’s such an appealing blend of Minecraft, Animal Crossing, and Harvest Moon. Some of the things you can do include:

Despite having played for so long, I’m still discovering things. I’ve been talking with friends who play it and they have buildings I don’t, they’ve done things I haven’t. It’s very cool that the game has the same villagers and layout for everyone, but how you make money is up to you. Stardew Valley has some RPG elements to it, including customizing your appearance and leveling up skills. There are other choices as well that have a permanent effect on your game, outside of which skill enhancements to take, such as when a scientist asks if you’d rather foster some bats in the cave on your property or cultivate mushrooms. 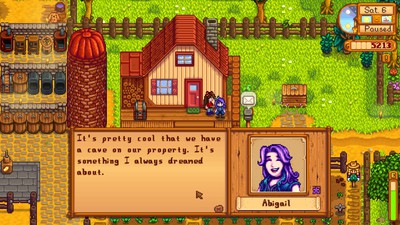 My personal choice for earning money was to take the Artisan skill and sell lots of mayonnaise. My chickens and ducks lay eggs, I pop the eggs into my mayonnaise machines, and I sell the resulting mayo for 💰. I also do a lot of pickling and make jelly from all the crops I grow. My cows and goats produce milk which I turn into cheese to sell. I also make wine and beer with my many kegs. 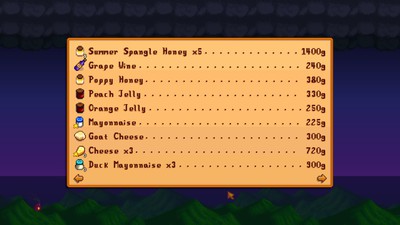 Besides trying to make money to further improve your farm, you can also work to improve the village down the road. There’s a rundown community center with mysterious creatures who get really excited when you donate various items that fix parts of the building. Once you’ve turned in enough items, some previously broken feature of the town will be restored, such as the broken-down minecarts located around the town. Restoring the minecarts gives you a fast travel option that helps you get around. 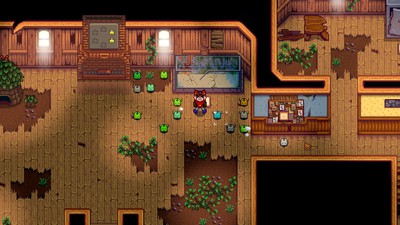 Buying the soundtrack 🎵 was a good choice as well because it’s so pleasant. I uploaded it to my Google Play library so I can listen to it while I work. My favorite track is Summer (The Sun Can Bend An Orange Sky).

There’s also a library/museum combo where you can donate interesting rocks and artifacts you find. I treated this like I do the museum in Animal Crossing: if I find a thing I haven’t yet donated to the museum, I donate it, even if I know I could sell it for a high price. This paid off in Stardew Valley because you get rewards from the librarian/curator periodically for your donations. You’ll also find lost library books scattered around, often buried in the ground where you have to use your hoe to dig them up. Finding these books lets you read them at the library, where they teach you secrets such as when to catch rare fish. 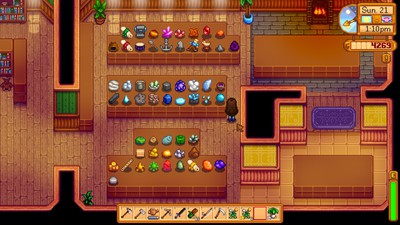 I love that there are enough things to do in a day that I don’t have time to do them all. Wake up, collect eggs and milk, feed the livestock, harvest crops, put water in the cat’s bowl, talk to the spouse, refill all the kegs and preserves jars, repair fences, and then I’m free to go to town, the beach, the mines, the desert, the forest… By the time I’ve finished the morning chores on the farm, it’s early afternoon. Maybe I want to go down to the beach and check my crab pots, gather shells, and fish off the dock. Maybe I want to go to the mines to get more coal and ore so I can make more preserves jars and kegs for earning more money from my produce. Maybe I want to gather wild plants in the forest and kill some slimes.

I also love the characters in the game. There are some serious and touching conversations that happen, and I genuinely like the different villagers. Even the grouchy old man comes around after a while. You get cut scenes when you reach different milestones in your relationships, and it’s pretty cool seeing a cut scene in a pixel art game instead of an ultra-realistic, graphics-intense game. 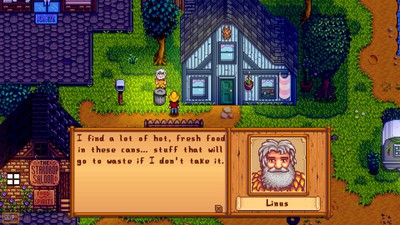 I appreciate that the game lets you romance people regardless of gender. There’s a biracial family where the African American father is a scientist. The town carpenter is a woman. There’s a character in a wheelchair, and Linus (shown in the above screenshot) is homeless. Pam and Shane appear to have problems with alcohol. For the first year, one character isn’t present because he’s off in the army. So the town isn’t just happy cookie-cutter families. 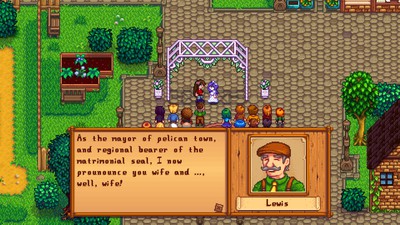 Stardew Valley feels open-ended enough where I don’t feel pressured down one particular path, but at the same time I have goals. That’s a problem I have that makes me grow bored with Minecraft after a while: I run out of ideas for what to do next. In Stardew Valley, I’m aware of new buildings I haven’t built yet, upgrades for my existing buildings, quests I’ve not completed, relationships I’ve not maxed out meaning cut scenes I’ve not seen, tools I’ve not upgraded, levels of the mine I’ve not reached, recipes I’ve not made, fish I’ve not caught, sections of the community center I’ve not restored… Basically, it’s not just a big open world where everything is fine the way it is, there is noticeable room for improvement and it drives me to fix things.

I’ve happily paid $50-60 in the past for new Animal Crossing games. Stardew Valley and its soundtrack are well worth the $20. I’ve gotten so much play time out of it so far, and I know I’ll be playing for many more hours. It’s a great game, and I really recommend it.