I got the Supernatural expansion pack

the other day off of Amazon, for The Sims 3. I had been hoping for such an expansion ever since Makin’ Magic for the first Sims was so awesome. Supernatural has been pretty good so far, enough to where I’d recommend getting it. I can’t say the same for, say, the Generations expansion.

This time around, you can make supernatural Sims right from the get-go, so there’s no hassle of befriending an NPC vampire and getting him to bite you, for example. I’ve had the most fun with my fairies, since they’re so cute and I like their auras. I have my fairy turn on her aura of creativity, then set all the Sims in my house to painting, playing bass, or other creative ventures. It works doubly well with my vampire Sim at night, since he already increases his skills faster at night anyway.

I have a witch, vampire, fairy, and werewolf living together. My witch and vampire Sims had twins together, one a vampire like dad, the other a witch like mom. I got tired of the regular $125/day maid, so I saved up and got Bonehilda to clean house. Turns out she’s a great babysitter, too, as well as general handyman. Clog the toilet? Here comes Bonehilda with a plunger. Break the sink? Bonehilda’s on it with the monkey wrench. The way she dotes on my children, too, I’m guessing they love her more than their parents. 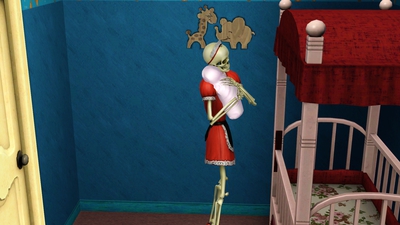 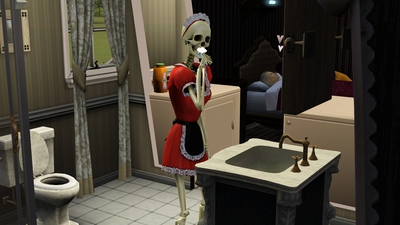 Having a witch in the family lets your Sims live on easy street. Once you’ve practiced enough magic, you can conjure an apple out of thin air. This isn’t special by itself, but you can then cast a spell to change the apple into something else. You don’t get to choose what that something-else is, but it can be anything from a seed or gem to an insect or fish. I’ve managed to create a pink diamond, which is one of the most valuable gems in the game. I’ve also changed the conjured apple into a rainbow beetle, which is the most valuable insect in the game. So poof, out of nowhere, you have a chance to generate a couple thousand Simoleons. I invested in a good wand for my witch so she can cast more spells per day, and I’ve never actually drained her magic. 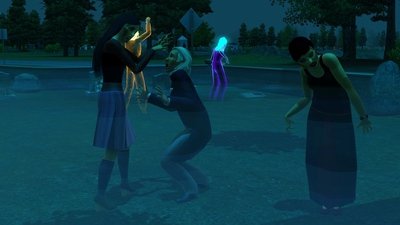 The werewolves haven’t been very exciting to me. On the full moon, my Sim turns into his werewolf form and eats like a slob. He’ll run around on all fours, hunting outside, which sometimes results in a gem or rock being found. I did get a kick out of being able to play fetch with a neighbor who had changed into her beast form. Zombies have also been a disappointment, but I think that’s due to a bug more than anything. There are reports on the forums of zombies spawning all the time, not just on the full moon, if you save your game during a full moon. This may have been what happened to me, because at all hours of the day and night, I had zombies pulling themselves out of the ground in my front yard. They would then proceed to stand on my front porch, yowling about not being able to get in and eat my Sims. I eventually installed a mod that prevents zombies from spawning entirely. I would prefer something else that would just disallow zombies during other moon phases, so I’m hoping such a mod comes out. I do want zombies in the game, I just don’t want them constantly harassing my Sims. 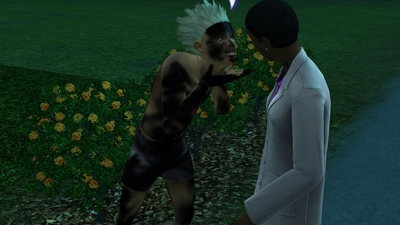 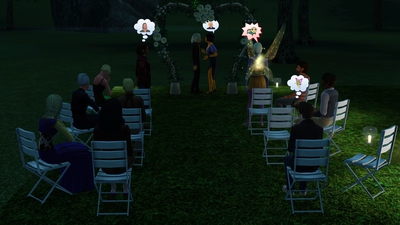