I got my Air! I’m typing this from it now. :) I’ve had fun organizing and configuring everything, and I’m finally settling in to using it for some real work. Well, not work as in someone’s paying me to do it: I’m just working on a new layout for this site and my portfolio. I bought Acorn from the Mac App Store and am using it for my image editing, with Komodo Edit for my HTML, JavaScript, and CSS. Here’s a screenshot of my primary desktop with Mission Control showing my apps: 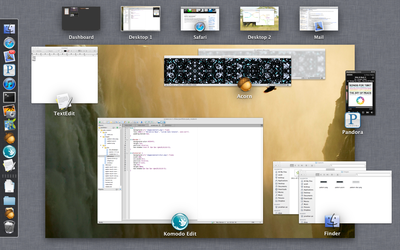 I’ve gotten accustomed to the differences between Leopard and Lion pretty quickly. The “natural scrolling” that I thought would take a while to get used to was actually a very quick transition; I found myself scrolling the opposite direction of what I intended today at work while using the mouse wheel in Windows. I’m also loving the gestures to flick between screens (three fingers left or right) and to go back/forward in my browser history (two fingers left/right). I’ve started using Alfred as a launcher program instead of having to look through my Applications list or the Launchpad. I probably could have used that in Leopard, too, but only found out about it recently. That would’ve saved some time anytime I dug around my Applications folder, which was fairly frequently.

I’m using Safari as my browser right now because Chrome isn’t as nice in Lion. I can’t have full-screen Chrome for one, and full-screen apps are surprisingly awesome. I wouldn’t think getting rid of the task bar and Dock would help so much, but it’s actually great. Also, Chrome doesn’t have the two-finger swipe for back and forward, except in the Dev channel where it happens to be reversed from what Safari offers. I hope they fix that, and add in a full-screen option. I’ll be glad to get back to Chrome and its nice extensions, as well as the lovely Inspect Element menu option.

Jon and I have been watching Six Feet Under again, after seeing mention on Reddit by several people about how it has the best last episode ever. We had started watching the series several months ago but just got bored with it, stopping near the end of season three. We’re now a few episodes into season four and enjoying it again, though the characters often piss me off. Like most TV shows, they can’t let people stay happy because I guess that would get boring, so the characters get in these contrived situations and always make the worst possible decisions. That’s why I finally gave up on Grey’s Anatomy: things would finally be okay, so one of the characters would suddenly become fickle and wreck her life again.

On slightly related news, those Nielsen people are serious about their TV ratings. I had completed the brief TV survey they sent in the mail a few weeks back, since they gave me $2 in the envelope and I felt guilty. I also told them I’d be interested in taking other TV-related surveys in the future, so a few days ago I got another big mailer envelope from them. It sat on my table a few days until I remembered to open it, and what falls out but $30 cash! They want me to keep a week-long TV diary of what I watch, what times, which TV in the house I use for it, etc. Fine by me; that $30 buys several lattes.