Holy crap, I got a Chrome OS netbook! I didn’t think I’d actually get one after I signed up for their beta program a few days ago. I didn’t submit a video explaining why I’d be an excellent choice, and my answers were short. I just explained that, as a student, I’d test Chrome OS by taking notes in class, doing my homework, and doing some programming; I also said I’d be able to test how an Internet-based laptop performs when out in the boonies at my parents’ house, where their wifi isn’t the greatest and their Internet connection is even worse. :P Somehow, though, I managed to score a position in the beta program—woot!

When I got home and saw a package outside my door, I didn’t even think of the possibility of it being a Chrome OS netbook. I was actually racking my brain trying to remember what I had ordered. The box was kind of heavy but not terribly big, so I was thinking it might have been some book I’d ordered. I about flipped my shit when I opened it and saw this: 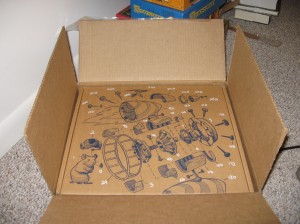 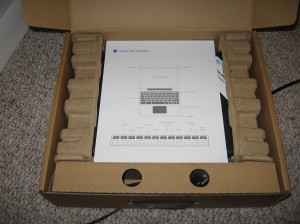 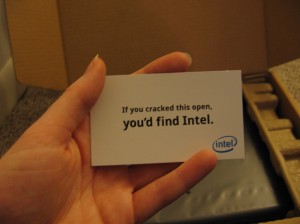 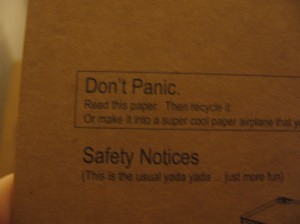 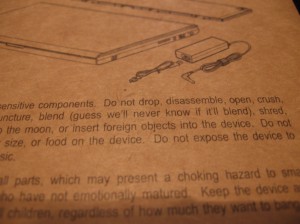 So I’m typing this on the netbook now. :) Setup was easy enough after I figured out how to get the battery in—I read the humorous copy on the double-sided, cardboard setup guide, but I didn’t bother to review the diagram of the angle at which to insert the battery. User fail. :P The netbook turns on as soon as you open the lid, which is cool. I’ve got it charging now while I use it, since it’s my first use. Choose a language, choose a wireless network, input your Google credentials, and away we go! 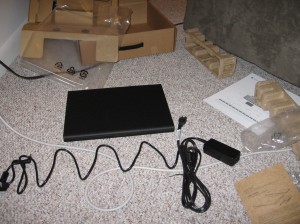 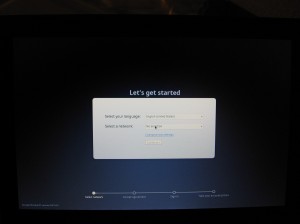 The feel of the whole computer (like physical texture) is interesting. It’s almost rubbery, but matte, if that makes any sense. The trackpad has taken some getting used to, coming from my 2007-era Macbook which has a separate button from the trackpad. The Chrome netbook has the single button, which is actually the entire trackpad—it’s clickable. Tap-to-click isn’t on by default and it’s very weird trying to push in the whole trackpad, which feels kind of stiff, to click the mouse. I turned on tap-to-click immediately.

The operating system will take some getting used to, but perhaps less because it is entirely web-centric and more because of little UI things. For example, in trying to upload photos, I’ve had to go to more effort than should be necessary. It keeps forgetting the last directory from which I opened a file, so the file browse dialogue opens up at some root location each time. I have to browse to my camera’s folder and then navigate that directory structure again to find each photo. Adding image thumbnails to the file browse dialogue would be awesome, too, because I’m currently previewing each image in a separate browser tab, remembering the file name (e.g., IMG_3162.JPG), and then browsing to that in Wordpress’s image uploader in a different tab.

I had to turn on a setting to allow the USB file browser to work. Before I had done so, when I plugged in my USB SD card reader, nothing happened and I couldn’t find how to browse my SD card. I tried going to file:/// (in the browser, of course, because that’s all there is!) and got the root of Chrome OS’s file system—I can work with that! As I expected considering this is a Linux derivative, there was a /media directory with my SD card mounted in it. Honestly though, I think I prefer this to using Chrome OS’s current USB file browser, since it just lists file names with a small drop-down menu whose only option is “Delete”. No thumbnails, no location bar, no timestamps, no sortable columns. All my SD card has on it is photos from my camera, so all I tested was clicking on JPG files. Doing so causes the file to open in a little screenshot-viewing web page. I found this screenshot viewer to be less useful than just viewing the raw image in the browser, however. It shows the image full-size, and using Ctrl-- and Ctrl-+ to try to zoom out and in on the image actually just zooms out and in on the little next/previous image links shown below the photo. :/

The trackpad is the most uncomfortable part of using this computer right now, because it feels less sensitive than my Macbook’s. Now, I understand this is a prototype, and this sort of thing will probably get worked out when the for-real hardware gets shipped, but maybe it’s a software issue, too. It seems like it doesn’t always pick up on me using two fingers for scrolling, and I have to scrub more firmly than the light touch required on my Mac. Sometimes it doesn’t scroll when my cursor is over top of some form fields, but when I move the cursor off the fields, a two-finger touch lets me scroll. I also keep accidentally grabbing things, such as the tabs, and dragging them around, when all I meant to do was click, release, and move the mouse cursor.

I’m accustomed to resting my left thumb on the button on my Mac, for use in clicking to select text while I move my right hand on the trackpad for selecting the text. This doesn’t work on the netbook because it sees two fingers on the trackpad and interprets that as scrolling. It’s probably just me having to get used to clicking the entire trackpad rather than a single button.

It looks like right now there’s not a way to take screenshots of the OS other than what’s in your browser window (but not the tabs, the little pop-up dialogue windows, etc.—just the page loaded), so no screenshots for you. :(

One desktop application I’m probably going to miss is Pandora’s. Silly, isn’t it, that what is mainly a web application to begin with is what I’d miss most from the land of desktop apps? I just like their Adobe Air app that comes with Pandora One, I think because apps/pages I don’t mess with frequently, I want out of the way. Maybe I should tear off the Pandora tab and put it in a different window, which shows up as if on a different desktop in Chrome OS.

I’m typing this from Jon’s apartment after much grief down at my own apartment. I’m usually able to connect to his router no problem from my place, at least from my Macbook, but the netbook kept disconnecting and then taking a long time to reconnect, or telling me it failed to connect entirely. I got a crazy idea of somehow setting up my old Airport Extreme as a repeater for his wifi, but Googling around didn’t produce many hits for that since Apple lets you use it as a repeater with an existing Airport Extreme network, but not with just any old wireless router. I also couldn’t share my Macbook’s Internet connection with the netbook because the netbook doesn’t have an ethernet port! How crazy is that, on an Internet-based laptop? It has a VGA port, but no ethernet. I hope when this netbook comes out of beta, the hardware manufacturers make some more sensible port choices. Anyway, the ‘net connection seems stable enough up here next to the router, so I’m guessing it was just a problem with signal strength. I wouldn’t really expect the hardware involved in a cheaper, beta-quality netbook to get the same signal strength as a polished, more-expensive-in-comparison laptop.

Everything feels very simplistic in the operating system. It just looks like the Chrome browser expanded to fill the whole screen, and if it weren’t for the battery life, clock, and signal strength icons being in Chrome’s title bar, I’d be looking around for the usual title bar found in OS X. Jon found a setting earlier to list all tabs on the side of the screen instead of along the top, but that was about as effective as putting your Windows XP taskbar on the side instead of on top—that is to say, not at all. If Google could do as OS X and Windows 7 do, showing only an icon for each tab when the tabs are on the side, that could be much more useful because less screen real estate would be used.

I read an Ars Technica review today about Chrome OS and they mentioned there’s a terminal to be found around here somewhere, but I don’t know where. The “Developer Tools” option just brings up the Firebug-like extension about Javascript and source of the current page. I’m not sure what I’d do in a term, actually, other than commands like uname -a to get some system stats. Apparently, the whole system is locked down, and I can’t modify code outside my home directory.

I’ll probably make other posts in the upcoming days and weeks of using this thing. I’m very excited to have it, and I can’t wait to lug it around to different places with different levels of connectivity, to see how productive I can be with it. I’m hoping using this netbook will just become second nature to me, though I know adjustments will have to be made in order for me to, say, program in Ruby for my Master’s project. Gotta find a good online IDE for starters. I’m going to see if there are any updates available from Google now (I saw a menu option about updates earlier), and then do what I usually do this time of night: surf Reddit.